This is for any general chat and information. Posts on specific topics covered in other forums will be moved to keep all forums active and relevant. No political posts will be tolerated, and if you have had your fill of TSP then a political post is an easy way out the door"
Post Reply
13 posts • Page 1 of 1

I need a new lockdown task and I'm thinking of making an anchor riding sail. After your thoughts before I start the task, if you use one on your boat I interested how big yours is?

The hunting at anchor settles if I place a tarp over the boom to move the CE aft of the CLR. But the topping lift creates a harmonic whine in the hull which is bloody annoying and I can't sleep with it. So I drop the boom end on the deck for quiet and move the CE forward and she hunts again.

I'm going to make one of these anchor riding sails from an old jib.

Batten on back edge with a hank at either end that pops onto backstay. Eyelet on other corner with line to boom.

Basically a triangle. Should of kept it when we sold the boat. 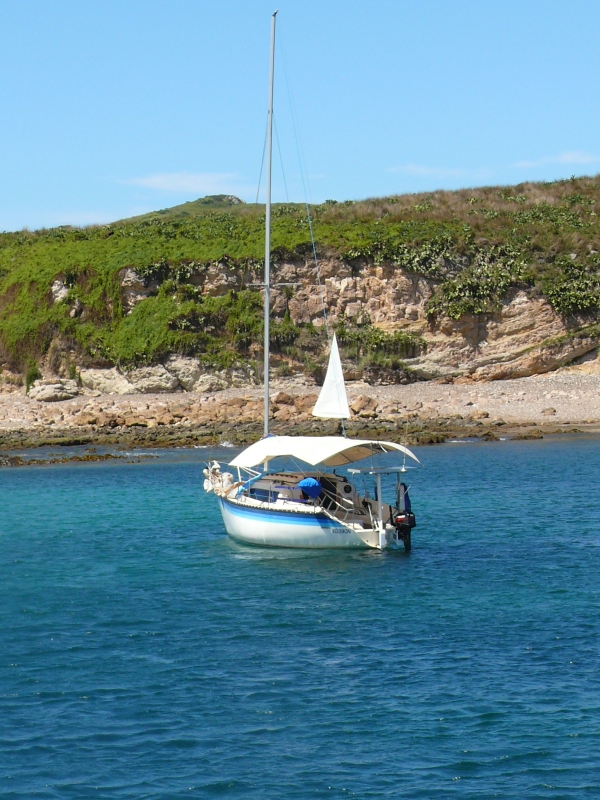 That Fin Delta creates a V shape which is easy to do, nothing special about making that but i think it would work better than others I've seen which are just a triangle.
Or S26 is a pig at anchor and I've often thought about making a riding sail. One thing i do now which has made the boat a lot more settled is to lower a weight( i use or spare anchor) down the main anchor line a few metres. It pulls the anchor line straight down from the bow so the boat just pivots around the bow instead of pivoting around the anchor. Much more settled and it gives extra shock absorbtion too in windy conditions.
Top

As a side note - the boom awning-mahal we had took care of this pretty well.....

Thanks for the replies. I think I will start this weekend.

Just for interest I have also had a similar but different problem at my semi regular mooring in the mouth of the
Clyde River with strong current but no wind. The Elliott swinging around with the rudder lifted. The simplest solution I found was to place a bucket in the water on about 3m of rope off the back, it dampened the motion nicely.
Top

Ive had a problem waiting for the Swansea bridge with wind vs tide (runs at about 3+ knots) - where the large mooring buoy went under the bow and got stuck in the forefoot of the keel - managed to push it out but a nice scratch was left. Same solution - a bucket off the transom to hold off.
Top

Until I saw this post, I had forgotten that we used to have a lot of problems with this and swung wildly in any sort of current or wind. I thought the reduction of this issue was because I had got smarter about choosing anchorages or some coincidental change in wind and tides, but that just doesn't make sense. It turns out that we accidentally fixed the problem while doing other upgrades.

Rcracing2 wrote: ↑Sep 15th, '21, 07:51 One thing i do now which has made the boat a lot more settled is to lower a weight( i use or spare anchor) down the main anchor line a few metres. It pulls the anchor line straight down from the bow so the boat just pivots around the bow instead of pivoting around the anchor.

Thinking back, the problem reduced when we added a length of heavy chain to the rode to help stop dragging anchor in soft sand and strong wind/tide around Moreton Is. The chain is oversized (12mm?), but it was what I had lying around and definitely does the trick. Because it is so heavy, it acts like a weight clipped to the rode (someone on TSP once told me this is called a "kellet") and in all but the most ferocious wind and current, the rode drops straight down.

Incidentally, in deeper water when the length of rode we let out is longer than the depth of water, we still use a kellet to stop the rode wrapping itself around the keel at slack tide, so we always have a vertical rode.

The problem then seems to have been virtually eliminated by the addition of the bimini which would provide some windage at the stern similar to a boom awning.

Nothing like killing 2 birds with 1 stone, or if my maths is correct, killing 3 birds with 2 stones...

Once we can actually leave the house! id planned on getting a kellet - we have a stern anchor we can use, but thought these look like a good solution as they're wrapped in rubber: https://www.kmart.com.au/product/kettle ... lsrc=aw.ds

I might try a kellet next time I anchor in a tidal zone.

I had a nasty experience last year when anchored overnight in Trinity Inlet, Cairns that I don't want to repeat. Anchored in about 8m of water near the mouth in black mud with a Delta anchor. About 2am I wondered why red lights were going past the v berth hatch. Got up and realised we were drifting with the current down the channel to sea. Went to the anchor rode and pulled it up until the chain hit the keel and it was stuck. Realised the rode was wrapped around the keel and bulb. Started the motor and went back up the channel with the anchor hanging below the bulb in the channel. Found a free spot (there were lots of boats anchored) then dragged the anchor across the mud to get out of the channel until the anchor bedded in. The put the motor in neutral, worked out which the rode appeared to be wrapped around the keel, raised the rudder and motor. Went around in circles until I cleared the rode from the keel -took about 20mins and I was worried it wouldn't unwrap as it was not all in one direction it seemed to be wrapped around the bulb then change direction around the keel.

Reset the anchor then didn't sleep soundly but I am grateful for the near miss with not impact with shipping in the channel.

I put it down to two changes in tidal flow with the bulb snaring the rode on the first drop. As the tide came in it reduced the scope and lifted the anchor.

A bulbless lifting keel would have avoided this and I would have been able to clear the wrap by lifting the keel. I have wrapped the anchor rode on 3 seperate occasions now in the last 5 years.
Top

Hi Jon,
Your story is too hauntingly familiar to a couple of our near disasters. Also, I am impressed with your quick thinking solution to get out of what is a horrible situation.

Our first incident was the night we wrapped our rode around the keel and a navigation beacon at slack tide. I managed to motor our way out of this more though miracle than skill. It never occurred to me to raise the keel, but that may or may not have helped with the beacon wrap.
Second was waking up in the morning about 10km from anchorage, snagged on a sand bank a few hundred metres from the main shipping channel having passed rocky outcrops and who knows how many other potential nightmares.

Both would not have happened if we had a kellet to stop the rode wrapping the keel.

These days, I am belts and braces at anchor, with oversized chain, oversized anchor, kellet when needed as described above, and an anchor alarm because I don't trust these to work 100% of the time.

The free version of Anchor Pro app on iphone is good enough for our purposes but the trouble with any phone app solution is that it needs the phone plugged in and the app active all night. I had this turned on for our second incident but the charging cord was dodgy and the phone battery died. (add good charging cord to my list af anchoring essentials)

Yes good practice - ive not had a serious incident, but have woken up to 'Excuse me.... your drifting!" from another anchored boat - stern anchor had pulled and bow anchor was laid on the 'hill' leading up to the sand flat so after we turned it must have just slid down until it was hanging plumb.

Ive had a wrap and thought the situation could get worse if I pulled the keel up and rode jammed in keel case - the circle work ... worked.
Top

Don't skimp on your ground tackle. I was anchored broadside to the current in Congul Creek, Fraser Island, with the full stream at 6 knots or more at a guess. Had a manson supreme on the RL28, didn't budge an inch. Actually pulled a sapling out of the bank with the stern line.
And very grateful I was too. Had a case of the gastric, both ends sort of thing, damn Queensland water. I went forward at some stage with some vague thought of moving the pick, anchor line was like C sharp. Decided to give it a miss, I think the little Elliot 7 just down steam of me was grateful we stayed put too.
Cheers Robin.