Having problems joining TSP or want to post some feedback?
This is the place to do it.
Post Reply
463 posts

Might I suggest you purchase the "Welcome Aboard" guide to trailersailing.

The download only costs $20, was written by Paul David, who died of a rare form of blood cancer, so proceeds of the book are donated to the cancer council.

Cheers
Jeff
TSP Administrator
"There is no perfect boat. There are only those shaded to your preferences.":-)
Top

Thanks Jeff,
I am interested in that guide, even better that the proceeds go to a good cause!

Might I suggest you purchase the "Welcome Aboard" guide to trailersailing.

The download only costs $20, was written by Paul David, who died of a rare form of blood cancer, so proceeds of the book are donated to the cancer council.

I had trouble trying to purchase "Welcome Aboard". When I tried to add it to My Cart, nothing happened. When I tried to create an account, it wouldn't allow me to select a State in Australia, which is a required field. There are a couple of gremlins to chase out of the TrailerSailerSalerShop!
Top

Shop is broken at the moment.

I can send you the file and bank account details separately. Send me a PM and the email address you want the file sent to and I will make it happen

Jeff
TSP Administrator
"There is no perfect boat. There are only those shaded to your preferences.":-)
Top

Yep, I am another newbie. I just met your Admin, Moodyblue on a camping trip and he invited me to join

I am ex-army retired. I have been traveling around the country house sitting for the past 6 years.

Mad keen fisherman and Moderator at fishingreminder.com. If you want to know the best time to fish just come on over to FR and check it out.

I am thinking of getting a Porta-bote that I can carry on the side of the caravan. I might get one with a sail kit

itsaboat mate - life is just a boat and then you marry one !!

Welcome Itsaboat. Don't worry, we will convert you from fishing to sailing!
Peter Y

You never know, I am convertable...I am open minded.

I was converted once...My wife converted me to single life...Best thing she ever did for me !!! Life is now great that I am converted !!

Get converted I say...Give me a boat or a fishing rod any day

Bit disappointed with the Admin here thou...Jeff packed up his camp and left all this rain behind...

itsaboat mate - life is just a boat and then you marry one !!

Thanks for adding us.

My wife & i are in Perth & we are restoring a Red Witch. Never sailed before, doing a keel boat sailing course soon

Its going to be a big learning curve, though we are looking foward to the work and sailing her (Lil Grace) asap.

There are plenty here that can at least give advice or thoughts.

Doing a sailing course is an excellent start. I did exactly that when I started many many moons ago. It was on an S&S 34 keel boat.

Regards
Jeff
TSP Administrator
"There is no perfect boat. There are only those shaded to your preferences.":-)
Top

Hi Jacob and Heidi, very wise move. Like Moody B myself ,wife and three young girls under 12 did that on a H28 long long time ago.
Sonata 6 Mango
Top

Welcome! Red Witches are a pretty design. I assume you’v Read up on Stuman’s thread?
Top

Hi everyone,
We live in the Pilbara in north WA and are currently on the search for a trailer sailer. We have caught the sailing bug and have been trying to learn as much as possible over the last year, but so far practical experience has been limited to a day sailing course and a week charter of a catamaran in the Whitsundays.
We are currently researching for a trailer sailer that would be fairly easy to launch, retrieve and sail. We are hoping to find something that would be comfortable enough for 4 people to spend a night or few at a time on. Initially most of our trips would be around the Dampier, Cape Lambert and possibly Exmouth areas. Our tow vehicle would be a Landcruiser. Any recommendations would be gladly received.
Anyway thanks for adding us, great site with such helpful information. Looking forward to reading through some more forum posts.
Top

For four people you need a V berth that works for two of you, and either quarter berths which are big enough for adults, or settee berths for two adults - which will generally involve a boat big enough to have decent quarter berths.
I have a friend who has an FJ62 (1985 petrol) which is rated only 2000kg, but I assume your Landcruiser is relatively modern and rated at least 3 tonnes, in which case the field is pretty much wide open there. Do check your tow capacity, it only takes a minute or two even if it's very unlikely it is a limiting factor!

Between an overnight crew of 4 but wanting it to be easy to launch, rig and sail, you're probably somewhere between about 20ft (6m) to, at a pinch, perhaps a Noelex 25, which while being quite large and around 1900-2300kg on the trailer, has a very straightforward rig and a huge cabin.

If your budget doesn't run to a Noelex, an RL24 is much cheaper and lighter, significantly smaller inside, but great fun. And of course, I love my Castle 650!

If you lived in Melbourne, we'd say to go down to Paynesville on a busy weekend and look at as many boats as you can!
A man's boat is his Castle. The Gippsland Lakes are my moat. Castle 650 #10, Roller Coaster.
Top

Thank you for the reply and your suggestions zebedee. Good point about tow capacity, the cruiser is rated to 3500.
I have noticed those models you mentioned pop a fair bit, I will do a bit more looking into them. I came across an RL28 which looked quite large but wasn’t sure if it may be too big.
It would be very helpful if we lived closer to a larger city to check out some more boats, may have to look into somewhere similar next time we are in Perth

Don't forget that anything over 2,000kgs. requires a breakaway braking system on the trailer. 90% of those boats don't come with that so beware! Most boats capable of comfortably accommodating four will be over 22 feet long and will crack the 2,000 barrier unless you are very careful with what you put in them.

Other than that, the main downsides with something as big as an RL28 or a South Coast 25 would be the parking space they consume and the weight of the mast when it comes to putting it up or down.

Apart from that, launching/retrieving a bigger boat is not really any harder than an 18 footer.
Peter Y

The RL28 was designed to the limits of trailability at the time; yes, they're big!http://noelex.org.au/
http://www.rlyachts.net/index28.asp

The RL24 is a very different design:
http://www.rlyachts.net/index24.asp

If you're looking at something around that size, there's a reason there are so many Noelexs; they're a well thought out design. The mast is relatively light, with just three stays, simplifying rigging.
A man's boat is his Castle. The Gippsland Lakes are my moat. Castle 650 #10, Roller Coaster.
Top

Ok thanks for that info Peter, and will definitely bear that in mind for the trailers. We will be towing fair distances so a good legal trailer will be important.

Thanks zebedee, the Noelex’s do look great. Not sure if the budget will stretch that far though. Will check out the links you sent.

Cheers for all the helpful info guys

Cazego, Welcome to the group. If you want I can take some pictures inside our mk4 RL24 if you want. We just bought it, However its in the process of being set up for cruising with the interior lining just being finished off at the moment (have just finished lining with some closed cell foam for insulation, and its now ready for a vinyl covering) I find it comfortable, although there is not enough headroom for standing. However with good weather its quite easy to stand with the cabin hatch open.

Theres a few cruising stories on the RL24 site for up your way.
http://www.rlyachts.net/cruise.asp
Top

Sure thanks obowey, would be good to see pics of your rl24. Thanks for that link as well, is not so easy finding sailing info up this way!
Was originally thinking would like to have the headroom to stand but we may have to make some compromises. Would you know whether the v-berth would comfortably fit 2 adults?
Top

Our V birth is very comfortable, however I have done some modifications to our boat (fiberglassing it turns out is pretty straight forward). It would probably be as wide as a king at the top with the centrepost dividing the head of the bead into two. Its probably about a meter across at the base.
Pictures speak better than words, so I will go work out how to upload pics.
Top

Just realised that when I was out on the boat that I had thought I had also taken a pic of the port quarter birth. It's basically the same as the starboard. Any case this is where we are up to interior wise for ours. 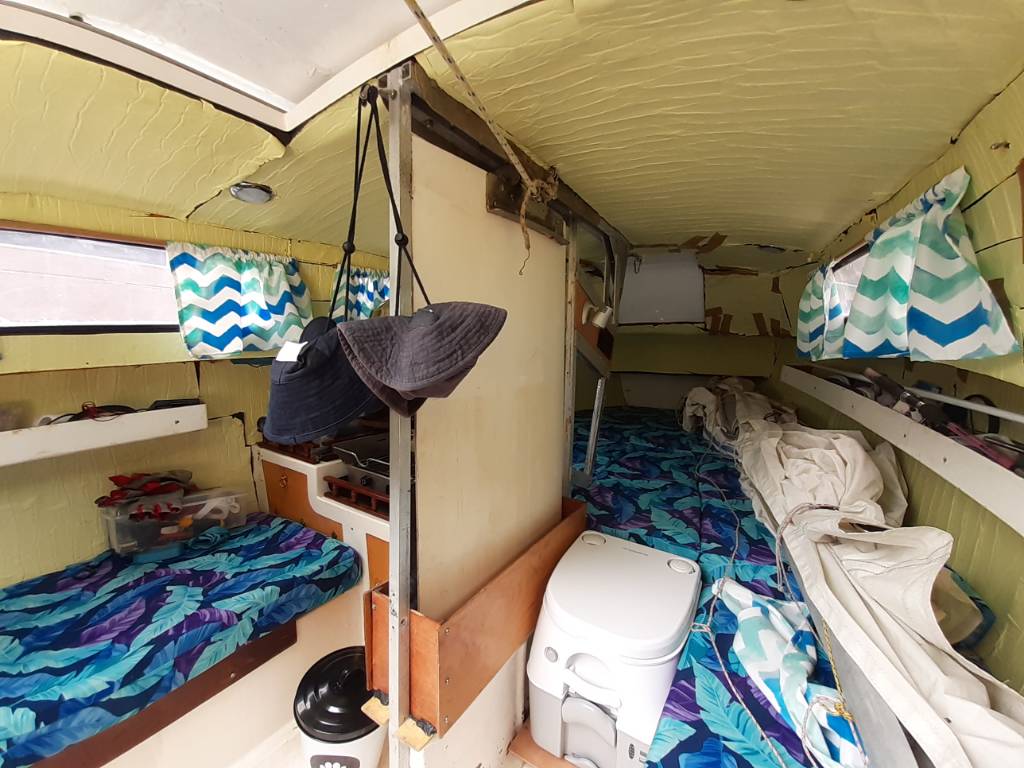 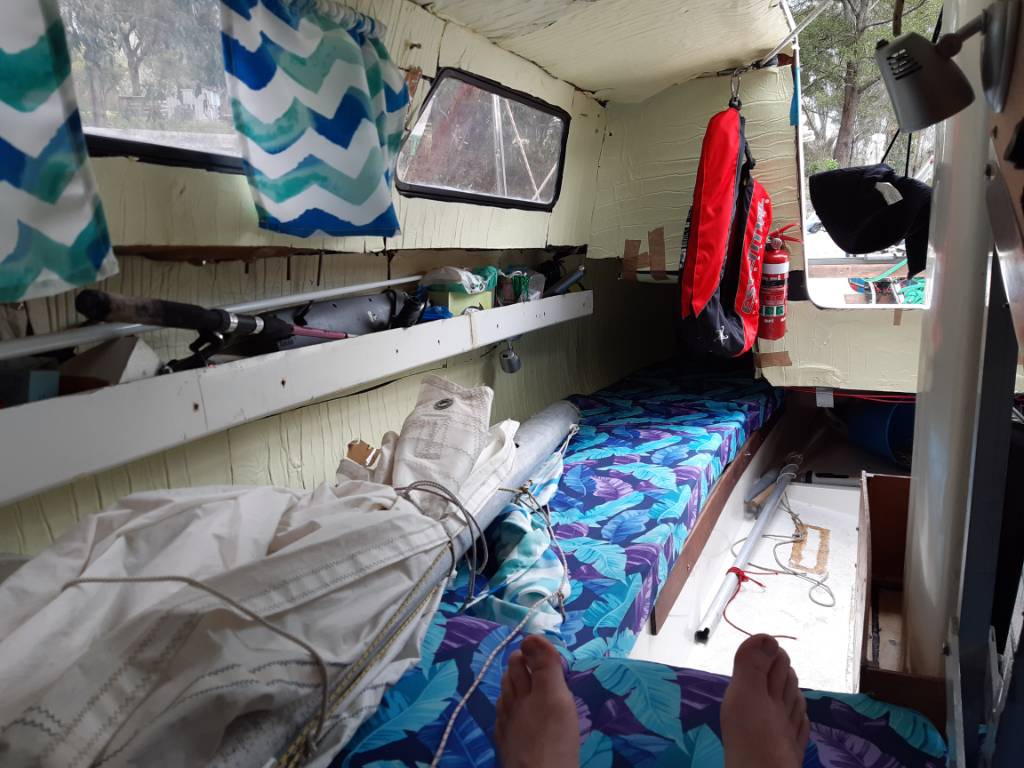 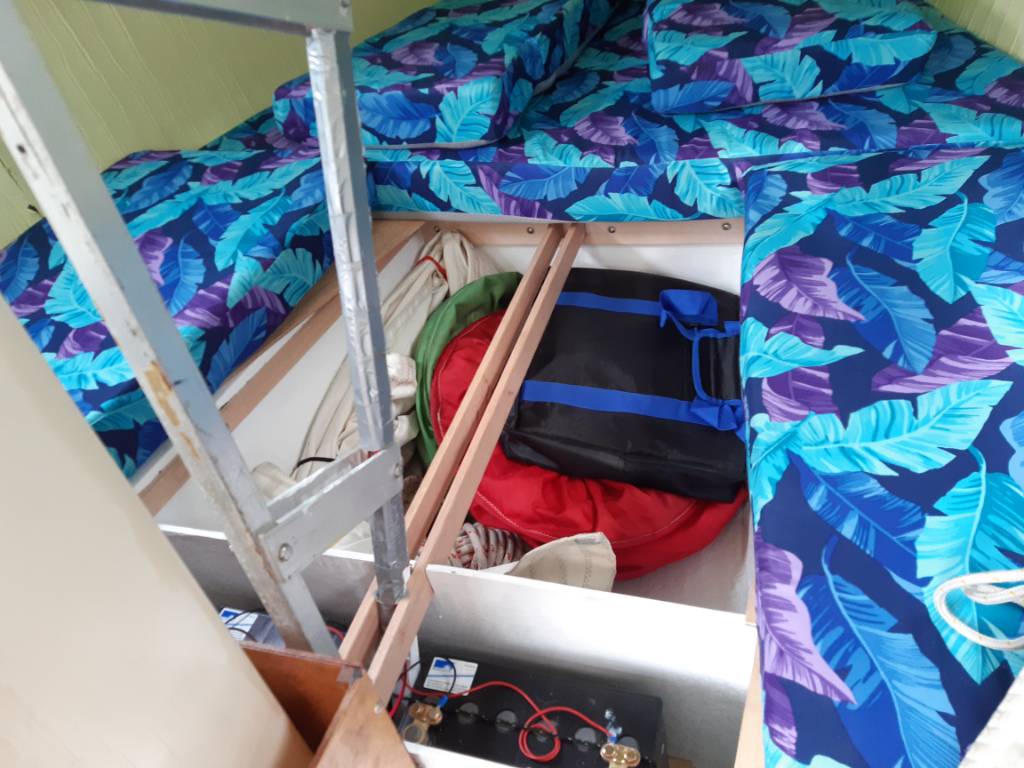 Sent from my SM-A305YN using Tapatalk

Thanks for uploading the pics obowey. Looks good. It has more bedding room than I expected for a 24. What is the weight of your boat?

Another quick question (and if I should be starting a new forum post please let me know - am new to forums), would anyone know of where to look or recommend someone in WA to get a survey or inspection of a boat? Most boats coming up for sale tend to be in the Perth region and as we are quite a distance away it might be an option for us to get it looked at before we make the long trip down

Hi cazgeo, last time I weighed it , it was 1400 on the axle. I need to go to a weight and balance for it on the Bairnsdale weighbridge.
Top

Hi fellow members my name is Phill and i'm fairly new to computers but I've been sailing all my life .I started on skyriders in the early 80s at the Illawarra yacht club then graduated to windsurfing and wavesailing. I then went through a couple of small catamarans and a 470. In 1993 I purchased a Cal 21 trailer sailer not long after the birth of my first child. We now kept the Cal for a further 5 years during which time we had another baby and we decided we needed a bigger boat.During the winter of 1998 we purchased our current boat Waterpistol a south coast magnum 28 which I had been eyeing off since it was first launched new and was the fourth Magnum produced. I am a carpenter/joiner by trade but my interest in boats saw me being employed at Seawind Catamarans as a shipwright from 1999 to 2012. During this time I learned the whole process of fiberglass boat construction from plug and mould development through to the final stages of sea trials and commissioning and even a delivery or two.Over the last 21 years of owning Waterpistol I have made many improvements and modifications to aid my continual use of the boat as I get older myself. I think that I may be able to be helpfull to others on this website as well as gain some knowledge too. I love to meet other boaties and share stories so I hope to see you out on the water.
Regards Phill.
Top
Post Reply
463 posts

Return to “Applying for Membership & Feedback”